THE LARGEST ANNUAL ONE DAY MUSIC EVENT IN THE AREA 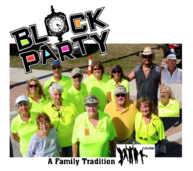 
In 1987, the first Block Party was organized to commemorate the centennial of Punta Gorda. It was the capstone event of a yearlong series of celebrations celebrating the city’s heritage.

What many people do not know is the decrepit state of downtown Punta Gorda back then. Buildings and streets were in disrepair, and the area was on its way to becoming a shell of the vibrant economic engine it once was.

Because of the Block Party’s resounding popularity, city officials asked the volunteer organizers to continue the event on an annual basis. Punta Gorda Days Inc. was incorporated as a nonprofit and entered into a partnership with the city to organize the biggest oneday event in Southwest Florida. Many years of success followed, and attendance grew to 30,000 to 40,000 people, many from other areas of the state who were seeing the city for the first time and came back to spend money.

All that ended in 2008, when the city decided it could no longer afford the cost and cast the Block Party adrift. Instead of receiving money and free labor, Punta Gorda Days Inc had to pay the city to stage the Block Party for them. Even cutting costs to the bone, reducing the entertainment budget, we even tried entry fees but every attempt didn’t give us the reserves necessary to fund the event. We struggled.

Ask Punta Gorda nonprofit groups and they will say they remember the Block Party as a critical source of the funding they used to conduct their activities every year. Punta Gorda Days Inc. saw the potential of the Block Party as a way to support charities Since that time, Punta Gorda Days Inc. has designed the event to be a principal or even the biggest source of funding for charities, nonprofits, service organizations, schools, youth and school sports teams, homeless groups, drug and alcohol rehabilitation services and on and on. The best estimate of the number of groups that have benefited is around 80. This comes in many different forms. Punta Gorda Days Inc. outright donates money to good causes, tens of thousands of dollars every year are paid to groups to perform a service on Block party day. The CHS art department organizes a Block Party Tshirt design contest in its AP class and receives a donation to buy much needed art supplies. Not so obvious is the number of nonprofits that make money by manning a booth at the Block Party every year. A donation is not like giving a grant to a single nonprofit or good cause. A Block Party donation is seed money that will multiply over and over through the years as the nonprofits return to raise money to do their good works.


Since then, we now are no longer 'the city's' block party but the people's block party. We look forward to hosting this party for you for years to come.